To understand the imperative for climate adaptation, you need only look at what experts see is already facing our planet.

And according to the most recent national climate assessment, we’re predicted to see:

The economic downside of such impacts is huge.

A detailed risk assessment conducted by a bipartisan group including former Treasury secretaries and other major policy figures forecasts massive losses in the near-term alone—$35 billion a year from hurricanes and coastal storms, 10% decline in major crop yields, and $12 billion a year in ratepayer costs for new power plants needed to handle changing climatic conditions. 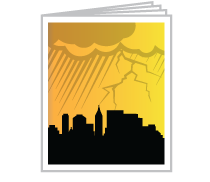